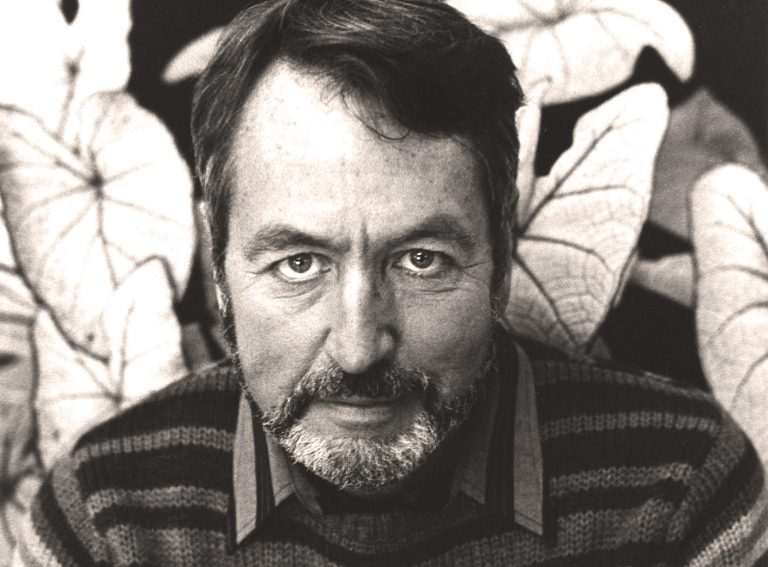 With his extraordinary black-and-white photographs, Don Worth (1924 – 2009) belongs to one of the most influential American landscape and plant photographers of the 20th Century. He was the first full-time assistant to legendary Ansel Adams (1902 – 1984) and taught photography at the San Francisco State University for 30 years, alongside his work as a trained composer and piano player. From 1960, Don Worth devoted his life mostly to photography and cultivated rare subtropical plants whose beauty and perfection had always fascinated him. His gelatin-Silver photographs – taken with Ansco or Deardorff large-format cameras, and developed by hand in his darkroom – are both technically and aesthetically exquisite works of art.

Don Worth was in close contact with representatives of the famous group f/64 of American West-Coast photographers, which was founded in 1932 by Edward Weston (1886 – 1958), Imogen Cunningham (1883 – 1976), Ansel Adams, and other pioneers. The group’s manifesto can be understood as a backlash to the prevailing pictorialism of the late 19th and early 20th Centuries. The representatives of f/64 wanted to move away from the impressionistic style that had culminated in the work of Alfred Stieglitz (1864 – 1946) and other photographers around the turn of the century. The West-Coast School aimed for a modern, pure imagery termed «pure photography», which was characterized by truthfulness, clarity, and maximum depth-of-field.

Inspired by the flower paintings of Georgia O’Keeffe (1887 – 1986) as well as by f/64 pioneers, Don Worth developed his very own style in plant photography over decades. His passion for Nature, especially for trees, leaves, flowers, and succulents, goes back to his childhood on a remote farm in Iowa, but also to the rich Californian flora around the San Francisco Bay. In his home in Marin County, he cultivated and photographed numerous subtropical plants in his lush garden and greenhouse, a passion that lasted for more than four decades.

Don Worth‘s meditative-looking photographs are precisely composed works of art that invite the viewer to take in the fascinating beauty of the floral world. Don developed a particular preference for cacti and succulents with their regular, almost abstract patterns in the changing play of light. Their shapes reminded him of mandalas and other iconic signs.

To Don Worth, photography was more than just precise representation of the world of appearances. Photography was a form of meditation combined with increased awareness and deep devotion. Through the photographic process, Don not only got to know himself better, he increasingly understood his work as a calling to explore Nature in its abundance, beauty, and order. In doing so, the introverted artist went beyond the visible and intuitively deciphered the spiritual essence of all being.

Today, one decade after his death, Don Worth‘s timeless photographs are coveted collectors’ items, often selling for thousands of Dollars. His works are represented in over 30 major collections and museums, especially in the USA. These include the Museum of Modern Art (MoMa) and the Metropolitan Museum of Art in New York, the J. Paul Getty Museum in Los Angeles, the Chicago Art Institute, the Australian National Gallery in Canberra, the Yokohama Museum of Art in Japan, and many more.

Despite more than 100 exhibitions during his lifetime, Don Worth’s work has so far bben known mostly to collectors and enthusiasts in the USA. With the tribute exhibition FLORAL MEDITATION, WBB GALLERY organized in 2021 the first major Don Worth retrospective in Europe.

»The camera, with its special magic, is able to arrest the ceaseless flow of time and preserve a tiny segment of life.« – Source: Don Worth: Close to Infinity: Photographs From Six Decades, Photography West Graphics Inc., Carmel, California, 2005

The exhibition FLORAL MEDITATION with 26 valuable, professionally framed original prints by Don Worth can be rented by museums for traveling exhibitions or retrospectives. In addition to the photographs, the exhibition also includes four panels that illuminate the life and work of the master in detail. If you are a curator, please contact the gallery (Dr. Peter Wallimann: +41 79 388 7309; info@wbb.gallery). 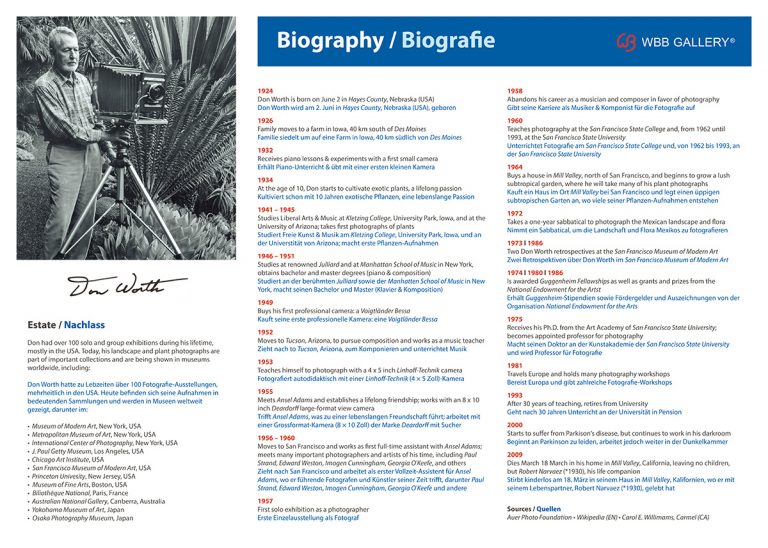 WBB GALLERY owns numerous valuable vintage photographs by Don Worth and other famous American 20th-Century photographers. If you are a collector or a curator and would like to make a purchase, please contact the gallery (Dr. Peter Wallimann: +41 79 388 7309; info@wbb.gallery)